Our Shrine to Brine

‘Brine’ may not be the most mouth-watering word, but it’s a fundamental element of what makes Thunderbird, Thunderbird.

To prevent chicken breast from drying out, it’s usually put into a buttermilk marinade. When we decided to use chicken breast in our burgers and develop our strips, we started looking at buttermilk too – it was essential that we landed on the juiciest, most perfectly seasoned chicken. But why buttermilk? What makes it so special?

Some research indicated that it was due to two main things: PH and enzymes. Enzymes do some really good stuff when it comes to marinating chicken, as they help breakdown some of the tough proteins, helping soften it. The low PH (acidity) of the buttermilk amplifies this, resulting in super tender chicken.

However, while buttermilk was giving us tender chicken, all of that acid was actually damaging the proteins, so that the breast held onto less moisture. It was soft, but beneath the softness, it was drying out. We needed something else...

This is where I turned into a real Thundernerd.

The goal: to make the chicken super juicy and tender, and help it hold onto that extra moisture.

Although buttermilk is often referred to as a brine, it’s actually a marinade. Marinades are basically just liquids that use acidity to impart tenderisation and flavour into meat and veg. Brines, on the other hand, use salt to pull water into the meat, and that salt alters the proteins, helping them hold on to the water.

I realised that brine was our best option, and settled on a process called equilibrium brining, which allows us to perfectly control the salinity of the chicken. Basically, we put the chicken into water, and a very carefully controlled amount of salt into a container, and add chicken. Simple. Over 24 hours, that salt is absorbed by the chicken - if we get our maths right, then we can ensure that the chicken absorbs the exact amount of salt that we want.

Trying to understand how and why this works involved a LONG time pouring over scientific papers, research articles and cookbooks. The simplified answer is that salt gets sucked into the chicken and it pulls water with it, trapping it in the chicken. The complicated answer is that this is all down to the negatively charged chloride anions and the positively charged sodium ions that make up table salt. 🤓

Once I understood how that process worked it opened up a whole new world of possibility. I started playing with other ingredients to try and get some of the good enzyme stuff that buttermilk adds to the chicken. I played with PH, trying to get the perfect level of acidity. I worked on every little element to try and get it to be as perfect as I could.

That took about nine months and somewhere in the region of 300 variations before landing on our final recipe.

The molecular detail of our brine is one of those things that you’ll probably never notice when eating our chicken, it’s just another element that makes up the whole Thunderbird experience. That’s really the goal with everything we do - recognisably just good ol’ fried chicken, but somehow a little a bit better in every way. 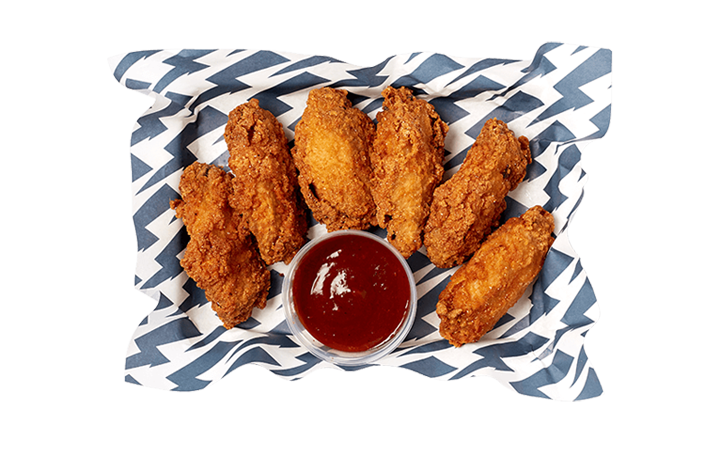